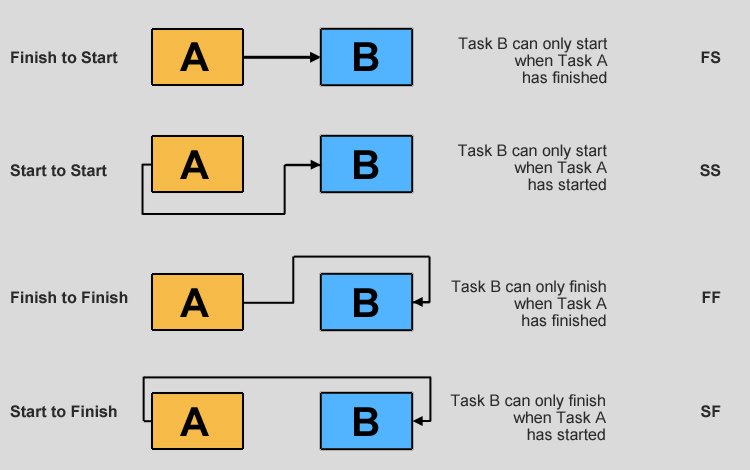 What are dependencies in project management?

Every project has dependencies, which Max Wideman’s Glossary defines as the “relationships between products or tasks”, i.e. tasks that require input from other tasks to be completed, or activities that can’t start until a previous activity is done. There are often several sequences to a task, and they’re all dependent on each other. The scope of a project requires these tasks to be completed in order.

Why do we need project dependencies?

Setting out the project’s dependencies is crucial to its overall success. A project manager needs to:

Examples of dependencies in project management

Some dependencies are external, rather than internal. In the previous example, the construction company building a wall may rely on third-party suppliers for building materials. Before they can even start building, they’ll also need licenses and planning permission.

There are four types of dependencies in project management which define the relationships between tasks:

As well as the types of dependencies, there are also dependency categories. These are logical, preference and resource-based:

Some project dependencies are mandatory, also known as Hard Logic dependencies, i.e. they‘re contractually or legally required as part of the project plan. Discretionary dependencies show there’s more than one path in a task or activity’s sequence. In that case, the team chooses their preferred order, usually based on experience.

How to manage project dependencies

Dependencies are often shown as Gantt charts, which can help:

Other tools include a Logic Network that shows the sequence of tasks or activities that logically come before or after a different activity or task. A PERT chart – the Program Evaluation and Review Technique – is useful for analysing tasks involved in a project. It lays out the minimum time needed to complete the project, showing a hierarchical breakdown of the project requirements.

Other diagrams that are particularly useful within the project plan for easy referencing by team members are:

Managing dependencies within a project will help both the project manager and team work and manage tasks in their best possible order. This helps ensure a project is completed on time, if not ahead of time.