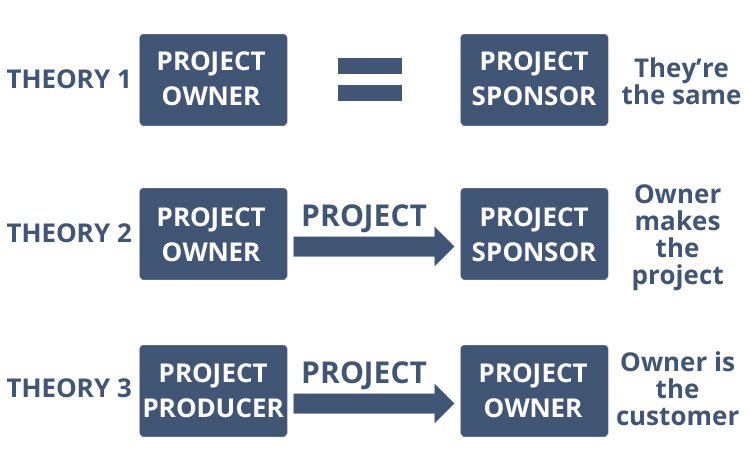 The terms ‘Project owner’ and ‘project sponsor’ aren’t consistently applied. Because of that, there isn’t a generally agreed upon difference between the two. Here are the three most popular answers, finishing with PRINCE2’s answer at the end.

This idea asserts that the sponsor is one executive, while the project owner is the entire organisation. That makes sense when you think of a project as a ‘temporary organisation’, found within a parent organisation.

In one APM report, the project owner is “a team including the sponsor, project champion and owner’s project manager”. Bear in mind the term ‘project owner’ is used informally and, as a result, has taken on different meanings. Also, this is just one report, so it shouldn’t be considered APM’s gospel definition of the term.

Idea 3: the project owner is the customer

This is the same principle as the second idea, except the project owner doesn’t make the product, but is the person or persons who receive it.

Idea 4: replace them with more descriptive terms (the PRINCE2 way)

Some of the above definitions completely contradict each other, which is confusing. PRINCE2 gets around this by not using either of the terms.

When most people say ‘sponsor’, they probably mean the executive. It’s worth asking people what they mean when they say ‘project owner’, because it really can mean anything! So just use the same terminology as everyone in your organisation. Doing so will avoid a lot of confusion.